This is what happened to me on the day of my tummy tuck surgery from the time I left my house in the morning to waking up in the recovery room after surgery. 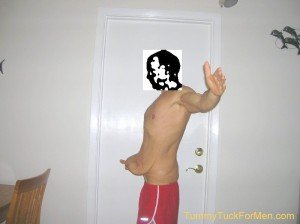 Pre-Operation Meeting with the Surgeon

Donna, the home health care nurse arrived at my house at 10:30am as planned. I called the doctor’s office and they told me to be there at 11:30am. Donna drove me to the doctor’s office and escorted me to the waiting room. She asked if I wanted her to wait with me and I told her I was fine and that she could leave. She left. I waited about ten minutes till Becky the plastic surgeon’s nurse came and escorted me to a private room where she told me the doctor would be in shortly to draw the “cut lines” on me followed by Bob the anesthesiologist. She instructed me to don the gown with the opening in front. After she left, I took off my clothes and put on the gown. I had a little bit of trouble getting the ties to stay tied so that it wouldn’t inadvertently open as I walked.

After about 10-15 minutes of sitting alone, then standing, then sitting, then pretending to look at a magazine the surgeon entered the room with what looked like a ten cent plastic ruler (the type that a kindergartener would have) and a marker pen. He rummaged through a drawer and pulled out a “see through” tiny bikini for me to wear. He instructed me to put on the bikini and take off the gown so he could draw his alignment and cut marks on me with the marker. I commented on the high tech device that he was using to draw straight lines (the cheap plastic ruler). The marking procedure took about 10 minutes to complete. He finished up and told me that Bob, the anesthesiologist would be in shortly to talk to me.

Meeting with the Anesthesiologist

Alone again. Soon, Bob entered the room. Bob was a friendly 40ish year old man dressed in his surgery outfit. He asked some questions about my medical history, told me what he will be doing during the procedure and chatted with me for a few minutes. I was impressed with him in that he was professional, competent and I felt good with him being the one handling my anesthesia. I signed a piece of paper pertaining to the anesthesia and he left.

A few moments later Becky returned and escorted me down the hall to a bathroom where I was instructed to relieve myself to empty my bladder prior to the operation. Ironically, the bathroom was in the employee break room where a girl was preparing and eating delicious smelling Italian food, buffet style, like for the whole crew. It smelled very good. I entered the small bathroom and did my best to relieve myself. I did the best I could but under the circumstances (having just gone at home and not having anything to eat or drink since the night before).

In the Operating Room

Becky then escorted me to the operating room where the plastic surgeon was waiting as well as 2 or 3 others. In the center of the room was the operating table. It was smaller than what I would have envisioned and was about the size of a pool side reclining lounge chair with arm pads extending from each side. I was then introduced to a couple of nurses in the adjacent room who would be participating in the surgery. Bob was also there.

I was instructed to walk around to the far side of the operating table where on the floor lay some towels for me to stand on. With me positioned in the center of the towels, the plastic surgeon brought out a small towel and small metal container filled with a reddish brown liquid (the topical antiseptic that they put on the patient prior to operating to keep things sterile). I was instructed to remove my gown and he proceeded to get on his knees and “paint” my body with the antiseptic liquid. He generously applied the liquid over my entire body except, my hands, my head and my private parts. When he was satisfied that I was sufficiently coated with the material, I was cautioned to extend my arms and not to touch anything with my hands as they would contaminate the sterile environment. Must have been quite a sight. Me, almost naked, painted red with my arms extended out being asked to maneuver myself to step on the stool adjacent to the operating table and sit on the operating table, then lie back without touching anything with my hands.

On the Operating Table

Once I was on my back on the operating table they covered my body with a blanket to keep me warm and probably for my privacy.

Bob then came out and proceeded to hook me up with his electrodes and stuff to monitor my heart, blood pressure and other vitals that he needs to monitor to ensure that I am properly “asleep” during the surgery. He explained everything that he was doing as he was doing it, so I felt fully informed and there was no surprises.

At this point I commented that I was surprised at myself for being as calm and relaxed as I was for being where I was and what I was doing. I did feel fairly comfortable and not nearly as shy or as intimidated as one would think.

Bob then proceeded to insert the IV needle (intravenous, giving of liquid substances directly into a vein) into the back of my left hand through which he would later introduce the anesthesia and/or other medications required for the operation. Insertion of the IV into the back of my hand did not hurt at all. He then made a remark that he would soon give me a “taste” of the stuff and that it would “take the edge off”.

I intentionally looked around the room trying to identify things and remember things before they knocked me out so that I might better remember it later. It seems that about a minute of this observing had passed.

The Next Thing I Knew I Was In The Recovery Room

All of a sudden I magically woke up in the recovery room. Surprisingly, I was more clear headed than I thought I would be. I found that I was wearing a large compression garment around my midsection along with two surgical drains connected to my body with plastic tubing. They sat me up, put on my pullover type shirt and asked me a couple of questions. I don’t remember them putting on my shorts (I assume they did that in the operating room). I had no pain whatsoever. The doctor and his nurse got on either side of me and escorted me to the bathroom where he told me they put a lot of fluids in me and that I probably had to pee. I did not really feel like I had to but they guided me there anyway. Well, if I didn’t have to go in the first place, now I was standing in front of the toilet with the doctor under one arm and the nurse under the other “waiting patiently” as I tried to “relieve myself”. TALK ABOUT PRESSURE!

They then placed me into Donna’s (my home health care nurse) car for the ride home, which was pleasant and uneventful. I did not have any trouble walking from the car to the house then to the bed with the help of my nurse. After saying “hi” to my dog and taking my pills I went to bed. Throughout the evening and night, every four hours Donna would wake me from my sleep to empty my drains and give me my medications.